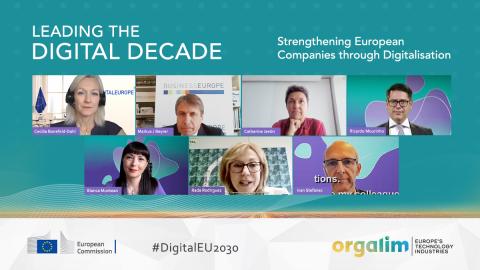 "Industry 4.0 was invented in Europe but we need to invest massively in advanced manufacturing technologies to keep that lead," said Orgalim President Rada Rodriguez, CEO of Signify, at the European Commission's Leading the Digital Decade conference yesterday.

Ms Rodriguez was speaking on day one of the high-level, two-day conference, joining an all-star panel to delve into the key topic of how to strengthen European companies through digitalisation.

There are different layers when it comes to the massive digitisation of companies, Ms Rodriguez pointed out. "Digitisation of processes to increase efficiency is one layer, and a very important one. Implementing Industry 4.0 is a whole other layer of digital integration and very complex, but it is that which brings the most benefits in terms of competitiveness and enabling new business models," she said. The updated Industrial Strategy published in May recognises the importance of advanced manufacturing but there is no action plan behind it, she pointed out, and the national recovery plans seen so far do not contain enough real focus on these technologies and Industry 4.0 transformation.

Industry 4.0 goes beyond improving efficiency and brings the most benefits in terms of competitiveness and enabling new business models.

Panellists broadly agreed on the key components for building Europe's strengths in industry and manufacturing through digitalisation: investment, upskilling, and supportive policy that avoids fragmentation and enables competitiveness. Ivan Štefanec stressed the need for a "straightforward, simple and stable legislative framework" to prevent fragmentation and also prioritised digital infrastructure and skills. "All digital issues will be crucial for the success or non-success of our European economic recovery," he said.

Markus Beyrer pointed out that, while Europe has leaders in advanced manufacturing, it also has laggards. "Europe is not firing on all cylinders and therefore we need to scale up our opportunities," he argued, calling also for greater investment in Industry 4.0 and advanced manufacturing. Catherine Jestin particularly appealed for policy makers to consider the impact on the competitiveness of European companies of proposed policies, to ensure that they enable digitalisation and do not put European companies at a disadvantage compared to their competitors worldwide.

Ricardo Mourinho Félix acknowledged the key role of the EIB in supporting digitalisation, and particularly emphasised infrastructure and skills as fundamental. He pointed out that over the last two years the bank has invested more than two billion euros into projects related to artificial intelligence technology, for instance, and in 2020 alone it invested almost 15 billion euros in innovation, skills and digitalisation.

Summing up, Cecilia Bonefeld-Dahl highlighted the need for Europe to focus on what it does well, namely our strong manufacturing industry, and not just on where it is weak.

Orgalim has released a new edition of its worl...