A rich heritage of European collaboration

The technology industries represented by Orgalim are proudly European – and the history of our association is closely intertwined with the history of the EU. In fact, the association’s founding even pre-dates the signing of the Treaty of Rome.

Orgalim officially came into existence in 1954 – making the association over 60 years old. Yet its origins date back even further, to the first post-war European engineering congress held in Paris in 1948. This event brought together representatives of technology companies from across the continent, with the aim of showcasing the latest innovations and, more importantly, rebuilding personal networks that had been disrupted by years of war. 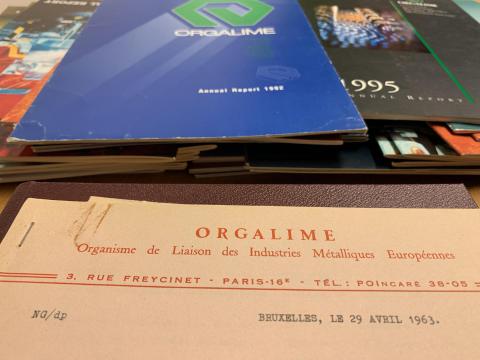 At a follow-up meeting of the congress organisers, the talk turned to developments in free trade and the Schuman plan that was paving the way to the European Coal and Steel Community. With the value of cross-border collaboration becoming more relevant than ever before, the network put forward a proposal to form a European metal industry confederation – sewing the first seeds of what would later become Orgalim.

The idea blossomed further in 1954 as representatives of the technology industry associations assembled again in Paris. Twelve countries were around the table: Austria, Belgium, Denmark, Finland, France, West Germany, Italy, the Netherlands, Norway, Sweden, Switzerland and the UK. A certain Mr Métral of the Belgian association proposed that the network meet from time to time as “men of good will” to discuss issues of common interest, and the participants agreed to form an organisation called ‘Organisme de Liaison des Industries Métalliques Européennes’ – ORGALIME for short. The Danish Mr Heineke was appointed Chairman and the secretariat was to be provided by the French association.

What began in this way as an informal club soon evolved into a valuable forum for facilitating cross-border cooperation, at a time when Europe’s economies were becoming increasingly integrated. Organisational structures gradually crystallised and in 1960 the decision was made to incorporate two parallel organisations into Orgalime – COLIME, representing iron and steel user industries, and MEFTA, representing the metalworking industries of the EFTA region – creating one central voice for Europe’s technology industries towards the nascent institutions of the European Economic Community.

Statutes for this new association were adopted in 1962 and a dedicated secretariat established in 1963, with Nicolas Groenhart appointed as the first Secretary General. It was decided that the secretariat would be located in Brussels, where we are based to this day.

A lot has changed since our founding over six decades ago. Some changes were big: we have expanded from the original 12 to 47 members, broadened the scope of our membership to include sector associations, and grown our secretariat to a team of over 30 today. Some are perhaps on a smaller scale – like the change from Orgalime to Orgalim. The most important things, however, are still the same: we remain the leading voice of our industries in engagement with the EU institutions – and our belief in the value of European collaboration is as firm as ever.

The Conference on Industrial Technologies IndT...