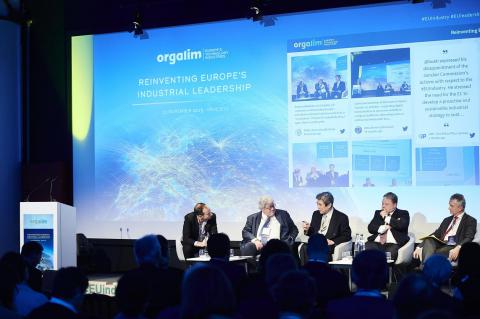 Whether debating digital transformation, technological sovereignty or Europe’s place in a new global order, EU policymakers once again have industry high on their agenda. So on 12 November, Orgalim welcomed over 140 high-level guests to the ‘Reinventing Europe’s Industrial Leadership’ event. The goal: to exchange views on how Europe can stay in pole position in a changing world. From the lively back-and-forth on stage to the buzz of chatter in the networking hall, there was no shortage of ideas on what the future might hold – with a few key takeaways emerging from the debates.

The afternoon keynotes and panels saw leading lights from industry and policy survey the EU’s place in the global competitive landscape. Interestingly – given the doom-and-gloom narrative that often surrounds Europe’s competitiveness – the message came through that there is little need for European industry to ‘reinvent’ itself. Rather it will succeed by staying true to its roots and reinforcing the foundation of its success: innovation. Rada Rodriguez, Member of the Management Board at Schneider Electric GmbH and Orgalim President, put a fine point on it: “It is only through innovation that we can strengthen our competitive edge. Europe has a long tradition of innovation, and it is through innovation we will compete, differentiate ourselves and set the agenda.”

In an inspiring keynote Claudia Olsson, Founder and Chairman of Stellar Capacity, piqued the audience’s interest with a look at the emerging tech that could shape Europe’s future (slides available for download below): from advanced AI or humanoid robots in industry to new mobility solutions like hyperloop; from blockchain-enabled logistics to moonshots in areas like quantum computing. Elsewhere speakers highlighted opportunities where European industry already has a strong competitive edge to build on, with embedded AI and low-carbon tech featuring high on the list.

Taking the conversation to the heart of technology firms’ daily work, a panel of Chief Technology Officers (CTOs) gave a glimpse of how innovation is created from the ground up. This vital work was recognised in the presentation of the CTO of the Year Europe award, concluding the afternoon programme: ABB Electrification’s Amina Hamidi-Calvo and Faktion’s Joeri Van Steen were honoured in the categories Large Enterprises and SMEs respectively.

.@Claudia_Olsson highlighting need to focus on ethics when talking about technological advancements. This is exactly one of the strands of the High Level Expert Group on AI. @Orgalim_EU is actively involved in further shaping this discussion. #euindustry #euleadership @Orgalim_EU pic.twitter.com/ISdl5YXFfx

Rethinking the role of industry in the Europe of tomorrow

Industrial innovation across areas like green tech, healthcare, and smart cities is prompting a fundamental rethink of the role industry will play in shaping Europe’s tomorrow. And this has not escaped policymakers at EU or national level, as Fabian Zuleeg, Chief Executive at the European Policy Centre, pointed out: “There is increasingly a recognition that goals like sustainability or strategic autonomy can only be achieved with a meaningful industrial policy.” 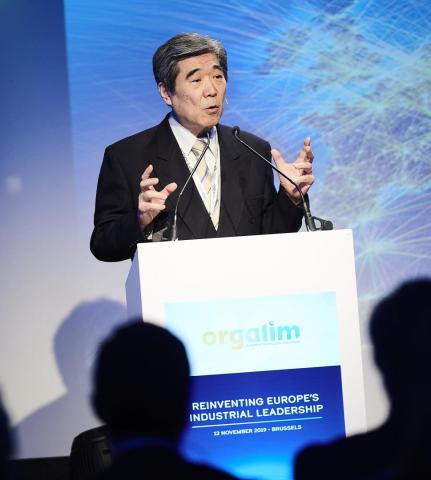 Japanese Ambassador to the EU H.E. Kazuo Kodama shone a spotlight on how Japan’s ‘Society 5.0’ initiative seeks to unlock the potential of these synergies, zooming in on how connected industries can support transformation in areas like mobility, healthcare and energy (the presentation slides can be downloaded below).

For many European tech companies, addressing societal needs is already a central pillar of their business model - with sustainability a key focus area. “Sustainability creates competitiveness,” underlined Olli Manner, Chairman of the Board of Elomatic, “not just on an ideological level but where you measure euros and cents and identify growth opportunities.”

Running through the contributions was also the competitive differentiator of a ‘European’ approach to technology development centred on value creation for society more broadly. For Tomas Hedenborg, Senior Adviser to the Board at Fastems and former Orgalim President, “human ingenuity and European values” are the two key factors driving future success.

But is this too rosy a picture of European industry’s place in the world? After all, the global landscape is shifting rapidly, with the rise of China looming large in the discussions. As Juraj Nociar, Head of Cabinet of Vice President Šefčovič, European Commission, pointed out: “15 years ago no one thought the EU’s leadership could be in question. But in 2005 the Chinese economy was six times smaller than the EU’s; today it is almost the same size.”

For MEP Reinhard Bütikofer, the EU urgently needs a strategy to confront “systemic rivals” like China: “European policy needs to walk on two legs: we must proactively develop competitiveness on the basis of sustainability, while also being wary to the political developments on the global stage and defending our interests.” There is a fine line to be tread, however, as Orgalim Director General Malte Lohan pointed out: “We need to avoid an EU industrial strategy that aims to ‘pick winners’ – it should reflect and tap into the full potential of our technology industry ecosystem here in Europe.” 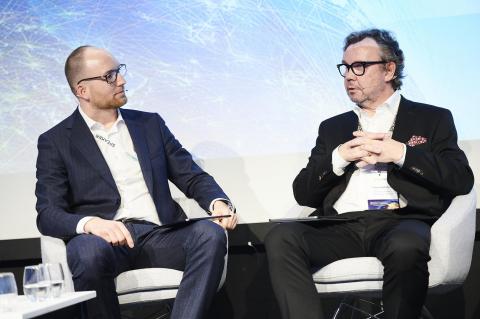 Ringing out loud and clear throughout the afternoon was the message that European collaboration will be crucial to secure leadership in a globalised world. “Playing on the national level is not enough,” underlined Thilo Brodtmann, CEO of VDMA. “The focus must be on the European and the global level.” Securing the confidence of citizens at home will be important too, as the lines connecting what happens in Brussels to people’s everyday lives are not always clear. 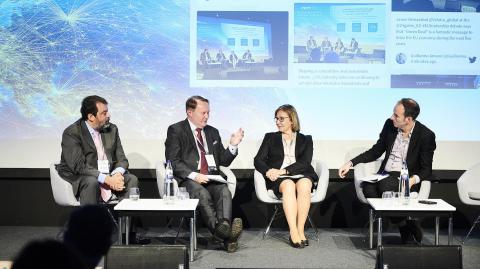 “Many phrases from the EU arena resonate strongly with our industry – Green Deal, mobility, energy efficiency,” pointed out Javier Ormazabal Echevarria, President and CEO at Velatia. “Yet people on the ground don’t necessarily understand the benefits of EU collaboration. We need clear messages that reach citizens on an emotional level.”

Bolstered by the energy and insights of the afternoon’s debates – and after raising a glass to 65 years of European collaboration at a special Orgalim anniversary dinner that evening – Orgalim’s members came together again on 13 November for the association’s Policy Committee and General Assembly meetings. In addition to formally appointing Rada Rodriguez as the new President of Orgalim, the day saw strategic discussions on topics like strategic autonomy, climate neutrality and the New Approach to technical harmonisation – areas that will be crucial to enabling Europe’s industrial leadership as we head into a new legislative period for the EU.

Click on the links below to download the presentations of speakers Claudia Olsson and H.E. Kazuo Kodama.

A gallery of photos from the event can be viewed here.