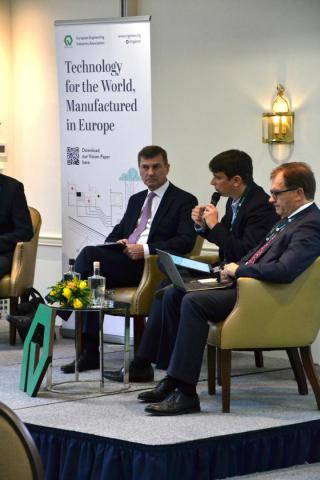 On 22 and 23 November, representatives of engineering associations from across Europe joined guests from the worlds of industry and policy in Brussels for Orgalime’s autumn General Assembly. On the agenda: a first-rate line-up of speakers, debates on the burning questions facing our industry – and a celebration of Director General Adrian Harris’ career at Orgalime ahead of his upcoming retirement.

With such a packed programme, selecting just ten highlights is not easy. But if we have to choose…here are our top takeaways!

1.    “European industry's future will be based on data. Data influences the whole industrial value chain”: Commission Vice President for the Digital Single Market Andrus Ansip shared his thoughts on the data economy in his opening keynote address.

2.    The data-driven revolution in engineering is happening now, and companies are already seeing a boost to their bottom lines: speakers from firms spearheading this trend discussed the changes taking place – and where the challenges lie ahead.

3.    China is ramping up its industrial strategy – and Europe is feeling the heat. Merics’ Jost Wübbeke gave an overview of Made in China 2025: the Asian giant’s plan to become a manufacturing superpower, backed by investment dwarfing anything seen in Europe so far.

4.    Policymakers and industry urgently need to speak out in support of free trade. Joost Korte, Deputy Director-General of the Commission’s DG Trade, addressed the challenges of public backlash: “We are not out of the woods when it comes to the globalisation debate”.

5.    EU funds can play an important role in strengthening Europe’s industrial base, as Budget Commissioner Günther Oettinger confirmed in his keynote on the future of EU finances. European added value is a key success factor, as he underlined: “We need European teamwork and public-private partnerships”.

6.    When it comes to EU industrial strategy, it’s time to move from talk to action. Orgalime President Tomas Hedenborg described how a modern, forward-looking industrial strategy “can be an enabler for the future and a driver of change” – and outlined Orgalime’s recommendations for the way forward.

7.    Digitisation is already paying dividends for the European engineering industry: latest figures released at the General Assembly forecast robust growth of 4 percent in 2017 – a testament to productivity gains unleashed by digital technology.

8.    A new member has joined the fold at Orgalime: the General Assembly welcomed the European Lift Association – the voice of the lift, escalator and moving walk industry in Europe. This brings to ten the number of sector associations and 42 the number of associations represented by Orgalime overall.

9.    After over 20 successful years at the helm of Orgalime, Director General Adrian Harris is setting sail for waters new. Tributes were flowing at a farewell reception ahead of his retirement at the end of this year, with speeches from his successor Malte Lohan and Orgalime President Tomas Hedenborg – who credited Adrian with “bringing manufacturing back into fashion”. Hear, hear!

10.  Finally, we learned that engineers are not just ‘left-brainers’: the evening’s entertainment gave guests the chance to showcase their musical talents and release their inner crooners and divas. Sadly, video evidence has yet to emerge…

Visit our Flickr Gallery for all the photos from the General Assembly.

Orgalim has released a new edition of its worl...