Industry’s role in promoting Europe in the world 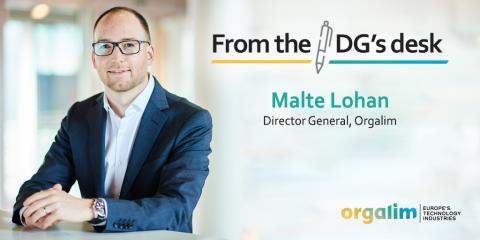 This is part of a series looking at the priorities of the European Council and President-Elect of the European Commission ahead of the start of a new legislative term in the autumn. Orgalim Director General Malte Lohan discusses how Europe’s technology industries can support EU policymakers in delivering on the objectives that matter most to European citizens.

For centuries, industry has been a vital channel linking Europe to the rest of the world. Innovations developed and manufactured here have been exported to all four corners of the globe, shaping Europe’s image as a technology pioneer (a fact that sometimes gets lost in our anxiety over the lack of a EU-grown Google or Facebook). European industry has made this name for itself through a confident and open engagement with the world, and the technology industries in particular are today highly export-oriented and embedded in global value networks.

So it has been very worrying to see the growing inward-looking, protectionist dynamic in politics at home and abroad in recent years. It is vital we fight this at EU level. The European Council’s Strategic Agenda and Commission President-Elect von der Leyen’s political guidelines send strong signals in favour of an ambitious free and fair trade agenda – and they can count on industry’s full support in this mission. For our part, Orgalim has been highly vocal on the need to stand up for open and multilateral rules-based trade, and for Europe to set the bar for the rest of the world. At the same time, it will be necessary to step up efforts to create a level playing field for European companies globally, while incentivising development of strategic value networks here in the EU.

Beyond the economic benefits of trade, a thriving, outward-facing EU industry also contributes to the more intangible – but nevertheless crucial – task of promoting Europe’s values in the wider world. Having worked previously in a global multinational company with strong European roots, I was often confronted with the question: what makes your company ‘European’, and why does it matter? There is no simple answer; it’s not necessarily about the location of your headquarters, where your shareholders come from, or where your production or R&I takes place. In this age of integrated global value networks, such ‘hard’ factors often don’t tell the whole story. In my view, what ultimately defines a company as European is linked to a particular set of values reflected in corporate practices and behaviours. An open, collaborative approach to working across borders and sectors; a genuine commitment to your employees, your communities and the sustainability of your way of doing business; and a belief in the potential of innovation to transform societal challenges into opportunities – these are examples of the values that Europe’s technology companies champion when doing business around the globe.

So to the new intake of EU policymakers I say let’s work together to promote this ‘European way’ on the global stage in the 21st century. Whether fighting climate change, delivering on the UN Sustainable Development Goals or flying the flag for open and free trade, the EU is already setting the bar for the rest of the world. Europe’s citizens and its industries have much to gain from a concerted further push. Let’s leverage the inherent strengths of our innovative industries to build on this leadership towards 2030 and beyond.

Read Orgalim’s recommendations on how the EU can enable European industrial leadership and set the bar for the rest of the world in trade, sustainability and beyond in ‘2030: an industry vision for a renewed Europe’.