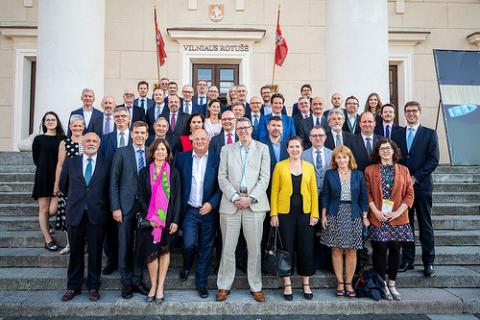 The Orgalime General Assembly met in Vilnius on 12-13 June. We report from the event - scroll down for highlights, a profile of our Lithuanian member and host LINPRA, and an industry case study of European technology leadership in the Baltic state.

Make sure to check out our Flickr album for photos from the event!

The event on 12-13 June brought together CEOs from across Orgalime’s members to explore the latest industry trends and burning policy issues at European level, while charting the future for the association in the year ahead.

The technology industries represented by Orgalime are in the midst of a profound transformation fuelled by digitisation and data. And this comes at a time when European society, too, is facing new challenges – many of which can be addressed by the innovative products and solutions emerging from tech companies based here in the EU. Remaining informed and engaged is critical now more than ever, not only to address potential risks but also to identify exciting possibilities opened up by these changes.

“We’re all facing many of the same challenges,” explained Darius Lasionis, the CEO of Lithuanian member association, LINPRA. “The General Assembly is a chance to exchange experiences and identify ways to translate digital transformation into growth opportunities.”

The meeting began in closed-door sessions where members reviewed the past year’s achievements and discussed a roadmap for the future.

The public event that followed saw representatives from select companies share their experiences and discuss how transformation in the technology industries is driving positive change in Europe’s economy and society.

Contributions from Gintaras Vilda, Lithuania’s Vice Minister of Economy, and Lasionis on behalf of LINPRA gave participants an insight into Lithuania’s status as an emerging powerhouse in industrial engineering and its enormous growth potential.  To cite just one impressive figure: the national industry output jumped by a massive 18% in the last year alone.

Top brands from IKEA and Siemens to Boeing and GM are increasingly choosing to manufacture in the Baltic state because of its competitive pricing, skilled labour and advanced infrastructure.

“Lithuania is just a great place to do business, and it’s only going to get better,” said Lasionis.

A diverse programme of keynotes and panel debates gave participants the chance to hear directly from some of the country’s most successful technology industry entrepreneurs – with case studies ranging from innovative digitised production models to low-carbon building systems.

Speaker Vidmantas Janulevicius shared his insights as the chairman of Global BOD Group, which brings together four different factories manufacturing high-tech products. One direction taken by the group’s business is solar technology, in the shape of emerging European solar cell and module production brand SoliTek. Referring to this industry, Mr. Janulevicius’ message was clear: not only can Eastern European countries hold their own against their Asian counterparts – they actually have a number of competitive advantages.

“Why manufacture in China when you have companies like BOD that can produce right here in Europe, with even better quality and respect for intellectual property?” Janulevicius argued. “Our people are just as hungry to work, and we have the talent to deliver”.

Janulevicius also made an unexpected discovery for his own business at the Orgalime General Assembly. After listening to the presentation by Jan Van Der Velden, Senior Manager Systems at the Dutch logistics company Vanderlande, Janulevicius is now in talks to apply Vanderlande’s advanced robotics in Global BOD Group factories.

This is exactly the kind of connection that Orgalime aims to facilitate during General Assemblies.

“The meeting showed that we can come together as Europeans, and that we can grow and thrive together,” said Janulevicius. “What’s good for my business, can be good for others. And vice-versa.”

Strengthening European cooperation across the network is a key priority for Orgalime’s Director General, Malte Lohan.

The industries represented by Orgalime employ nearly 11 million people in the EU and in 2017 accounted for some €2000 billion of output. “This is roughly equivalent to the GDP of Italy, and we continue to expand with growth reaching an impressive 4% in 2017,” explained Lohan. “The strength of our members makes our force when advocating for the interests of the European technology industries.”

“On behalf of the entire Orgalime team, we want to thank everyone who came to the General Assembly in beautiful Vilnius,” said Lohan. “Special thanks to our hosting member, LINPRA for a very warm welcome and seamless organisation.”

As an emerging powerhouse in industrial engineering, there’s lots of reasons to discover Lithuania.

With LINPRA’s support, Lithuania is fast becoming a top European destination for technology firms: the association brokers relationships between scientific institutions across Europe and Lithuanian businesses, while working to strengthen exports. By improving access to high-quality vocational education and training, LINPRA is helping to ensure that Lithuania has the right talent to realise its potential.

Company speakers at the General Assembly presented a number of case studies highlighting innovations emerging from the European technology industries - and how these are boosting the EU's competitiveness while addressing many of the challenges facing Europe's society.

One such example was given by Vidmantas Janulevicius, CEO of Global BOD Group - a group of companies bringing together four factories in high-tech industries. The company launched its activities in 1998 as an industrial manufacturer of pre-recorded CD, DVD and Blu-ray discs. For 20 years already, they have been a top B2B European supplier of discs for the music and video industry.

In 2009, BOD expanded their business to solar cell and module production under the SoliTek brand. Today, they are part of a solar technology cluster where they both produce solar cells and engage in research. With solutions such as ‘active’ photovoltaic building facades, their technology is helping boost energy efficiency in buildings while lowering carbon emissions.

Their EU base ensures smooth access to European markets as well as high environmental and labour standards.

Another string to BOD’s bow is the production of progressive optical eyeglass lenses: their new laboratory – one of the largest in Europe – deploys state-of-the-art connected manufacturing systems to produce custom lenses direct to order.