CTO of the Year 2022: Nominations open

Who is the most innovative technology leader in Europe? Nominate your candidate for the CTO of the Year Europe 2022 Award 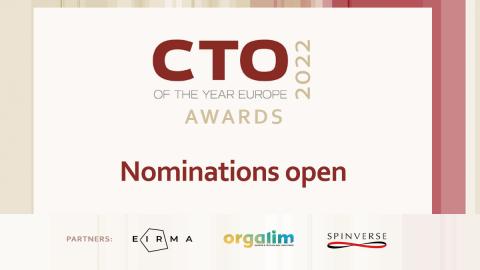 Nominations are now open for the title of European Chief Technology Officer of the Year. The 2022 awards will be given to the most inspiring, innovative, and visionary technology leaders in Europe. The award is organised by the European Industrial Research Management Association (EIRMA), Orgalim, Europe’s Technology Industries, and Spinverse. The awards will be presented ensuing EIRMA’s CTO Forum on the 19th of May, 2022 hosted by UNILEVER Foods innovation Center HIVE in the Netherlands.

The European CTO of the Year Award was launched in 2014 to recognise the achievements of a person who is both an inspiring leader and a successful technology developer. The winners will be awarded in two categories to highlight the role of both SMEs and large corporations in supporting technology-based growth in Europe. The final winner will be selected by an international jury. whose members consist of high-level technology influencers in Europe.

This year the jury members are Malte Lohan, Director General of Orgalim, Europe’s Technology Industries, Pol Lombaert, Group Innovation Director at Beaulieu International Group, Tomas Hedenborg, Former President of Orgalim and Founder and CEO of Fabel Advisory, Amina Hamidi-Calvo, CTO of ABB Electrification and CTO of the Year Europe 2019 for large corporations, and Joeri Van Steen, CTO of Faktion and CTO of the Year Europe 2019 for SMEs. The secretary of the jury is Pekka Koponen, Founder and Chairman of Spinverse.

The call for nominations is open online until 31 March 2022 – nominate your candidate today at www.ctoeurope.net/nominate.

The European Commission has today presented it...